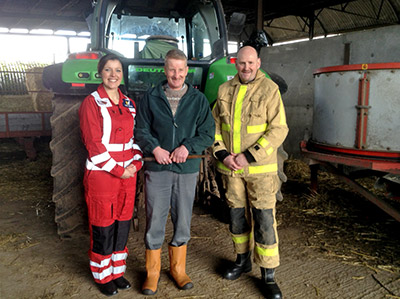 A happy ending: Air ambulance paramedic Kerry Hemas with farmer Graham Heatley holding the spike that speared him with firefighter John Deakin at the farm at The Grange, Lyneal, near Ellesmere, Shropshire

Shropshire firefighters were faced with an extraordinary rescue operation when a farmer accidentally impaled himself onto a 45 centimetre long tractor fork.

The 40 millimetre thick spike had gone straight through the right side of Graham Heatley’s lower back, across his abdomen and was sticking out of the left side of his stomach.

He had been removing black plastic from a three-quarter tonne hay bale with his back to the Deutz 110 hp tractor when it rolled forward and slowly skewered him, pinning him to the hay.

“I don’t think I applied the handbrake properly on the tractor because I began to feel the fork going into me and there was nothing I could do about it.

“I could feel the prong going through my back and into the hay so I was trapped.”

Neighbours heard his shouts for help and Henry Rook (23) managed to get through to the emergency services on his third attempt. Fortunately his mobile was the only one working, left with a small amount of battery life, after an all day electricity blackout.

On call firefighters from Shropshire Fire and Rescue Service arrived at The Grange Farm, Lyneal, as paramedic Kerry Hemas and a doctor from the county air ambulance were administering morphine to the 52-year-old farmer.

“I liaised with the doctor to find out how much time we had to get him out. Our initial thoughts were to cut the spike off but it was made of thick and hardened steel and our Holmatro cutting gear wouldn’t get through it,” said John Deakin, crew manager at Ellesmere Fire Station.

“We considered using acetylene to cut it but that was flawed because the heat would transfer along the metal spike and into Graham’s body.

“The only way was to take the prong off the machine and leave it inside Graham while he was taken to hospital.”

Working closely with the doctor and ambulance crew, four firefighters held the farmer’s body steady while colleagues used WD40 to loosen a nut, clamped it and managed to hammer the prong free.

“We were talking to Graham throughout telling him what we were doing and he was quite amazing. We had to tap the bar with a hammer to free it and Graham knew about that,” said John, whose full time job is a line manager for a robotics milking firm.

With the spike sticking out of his body, the badly injured man was carefully laid on his side by firefighters who put him onto a stretcher.

Within an hour of their arrival, the farmer was being flown to the University Hospital of North Staffordshire where surgeons were waiting to operate to remove the spike which had narrowly missed piercing arteries and organs.

A second air ambulance had arrived at the rescue scene with pints of blood which the medical team feared they would need.

“It was a very pleasing and successful outcome to a quite unusual and difficult incident,” added John, with 30 years' experience as an on call firefighter.

Graham Heatley is recovering well from his ordeal.