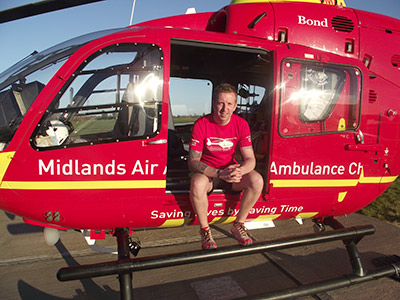 Shropshire firefighter Tim Hughes is running a dozen races in 12 months to raise £2,000 for the air ambulance.

A Shropshire firefighter has taken on the challenge of running 12 long distance races in 12 months to raise money for the Midlands Air Ambulance. Tim Hughes (35) only took up running last year - and this year is tackling ten half marathons and two marathons, one each month.

A crew manager at Telford Central Fire Station, Tim ran the Four Villages half marathon in Cheshire in January, Portsmouth Coastal in February and Stafford this month. His next race is the tough Snowdonia half marathon on April 6. His challenge also includes Liverpool marathon in May and an ultra marathon in December. As well as the 12 long distance races, he will also be throwing in a number of 10k events for good measure.

A firefighter for eleven years, Tim said he was inspired to run for the air ambulance after witnessing at first hand all the good work they do. "I think a lot of people know someone or of someone who has required the help of this vital, lifesaving service and this is a good chance to help in securing the future of such a valuable service which can make a big difference to people's lives," he said. "You never know when you may need it." Tim only took up running in January last year and is a member of Wrekin Road Runners.

"I'm now running up to 50 miles a week in between races. Joining Wrekin Road Runners has made a huge difference. I'm running further and faster than I ever thought possible. Being part of a club keeps you motivated and training as a group makes it a lot more fun."

A special free running shirt for the races was made by Stitches of Bridgnorth. So far Tim has raised more than £500. "I'm aiming to make £2,000 for this very worthy cause," he added. To donate, visit www.justgiving.com/timhughes12