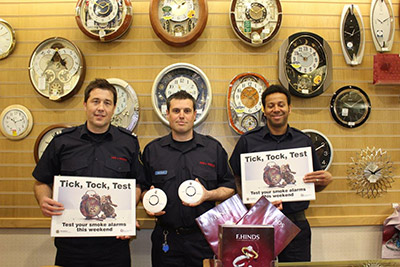 Shropshire firefighters (l to r)Adam Tempest, Aide Taylor and Lee Guinea took the opportunity at F.Hinds jewellers in Telford Town Centre to remind everyone to test their smoke alarms at the same time as clocks go forward one hour this weekend

When you put your clocks forward an hour this coming Sunday (March 30) don’t forget to test your smoke alarm at the same time - that is the message from Shropshire Fire and Rescue Service which is urging people to link the time change with a smoke alarm test.

It is all part of a nationwide “Tick, Tock, Test” message from Fire Kills, a Government initiative to help reduce deaths and injuries from fire.

“But by pushing the test button on every smoke alarm in your home, you could save the lives of your nearest and dearest, children, parents and friends alike.”

Last year in the UK, 197 people died in fires in the home with 70 per cent not alerted to the fire by a smoke alarm.

Without a working smoke alarm, you are more than four times as likely to die in a fire in the home with elderly people particularly at risk, said Rabinder, of Shropshire Fire and Rescue Service.

Even if you already have a smoke alarm, it’s essential to test them weekly to ensure they work.

“A smoke alarm which works can buy you and your family the valuable time you need to get out, stay out and call 999,” added Rabinder